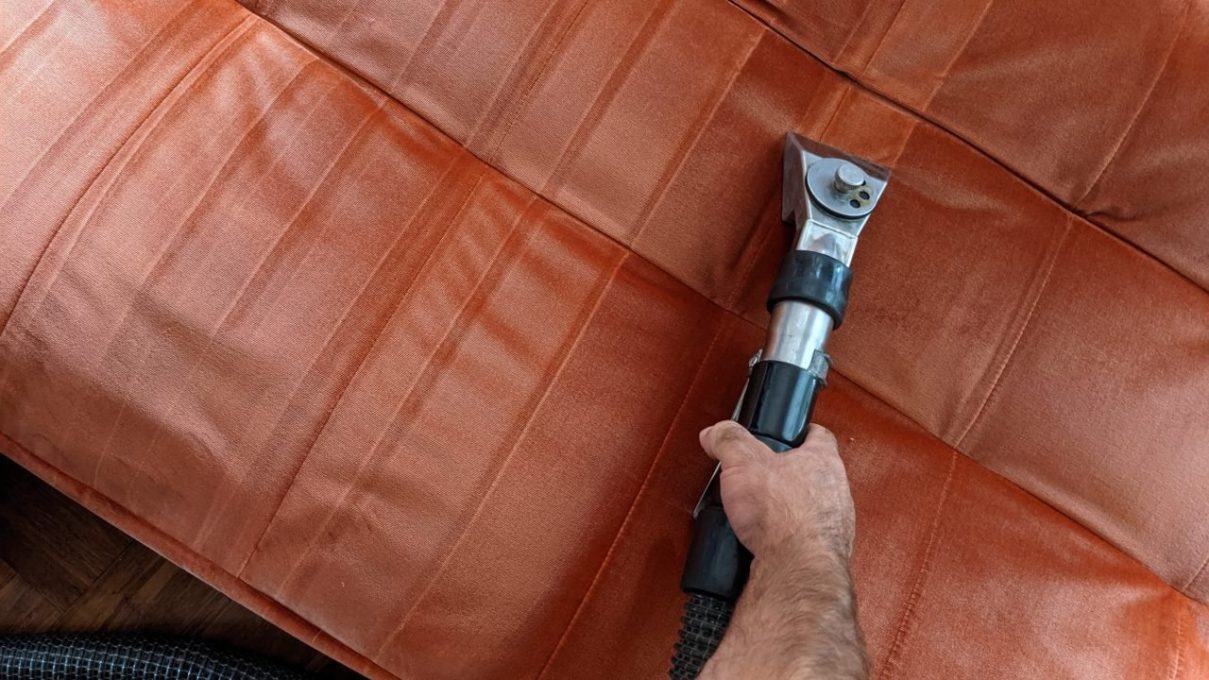 Pure cotton velvet requires careful attention & is easy to damage through rinse extraction cleaning. Because it is a “cut pile”, the individual cotton threads will tend to compact when wet.

It is for this reason that many upholstery cleaning companies will either refuse to clean velvet, or insist on using large quantities of volatile solvents to do the job. Dry cleaning solvent has its place in the arsenal of a professional fabric cleaner, but will not yield particularly good results for a general clean.

The owner of this particular velvet sofa had informed us that their cat had urinated on the fabric multiple times & that the visible damage & odour needed professional attention.

This image & the (very dull!) video below demonstrate how wetting affects a velvet pile and- importantly- how using a velvet “boffin” brush can reset the pile & reduce the risk of damage.

Urine will always leave uric salts within fabric, which need neutralising & removing. This creates an interesting problem when the fabric is velvet, as we will usually be looking to use as little moisture as possible to avoid potential damage.

In this case, our technician applied a specific urine neutralising solution to the velvet in minimal quantities using a sponge, rather than spraying it directly onto the fabric. This reduced the chance of the pile collapsing & ensured that we were able to remove the cat pee odour.

Our team are IICRC approved in Odour Control & have a range of solutions & equipment to tackle most issues.

Conclusion: The final result (which, alas, we forgot to photograph) was an odourless, sanitised & visually clean velvet sofa which our client was delighted with. This type of work tends to take a little longer than standard upholstery cleaning, but we find it very satisfying when we can bring this luxury fabric back to its true potential condition.

If you have any questions about our professional velvet cleaning process, please get in touch.

Thank you for reading! 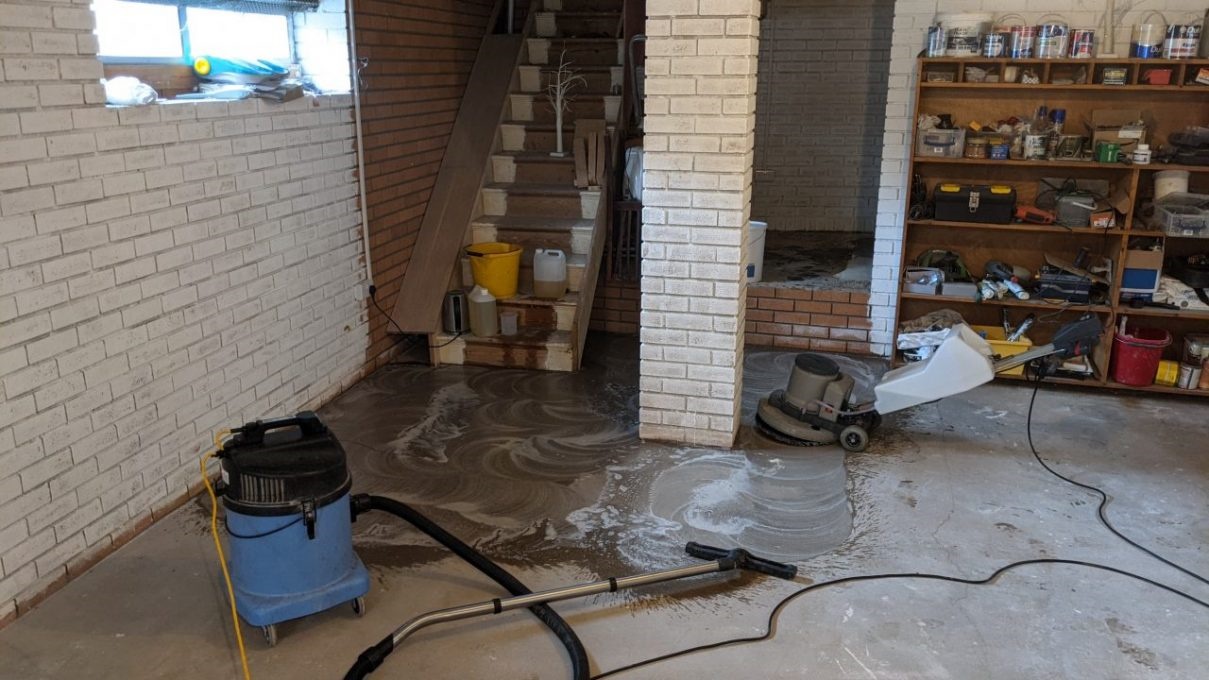 One of the many jobs completed last week involved the deep-clean & decontamination of this concrete basement floor. Following a recent part-renovation, the owner had asked us to survey & carry out a deep-clean of the concrete, followed by the application of a biocidal solution to ensure the area was hygienically clean.

After a thorough sweep-up, our process was to use a rotary floor scrubber with an attached tank to simultaneously apply a deep-cleaning solution & agitate the concrete. We did this in small sections at a time, extracting the resulting slurry with a wet-vac, then moving to another area.

The image shows our Numatic Hurricane machine with a black floor pad. You can see the solution tank is attached to the machine, allowing the operative to apply the cleaning solution as they work.

Floor pads come in a variety of colours, each with a different purpose. The black pad is the most aggressive of these, meaning the surface is scoured & a deep level of clean is achieved.

This method relies on the concrete having been sealed, otherwise the cleaning solution is rapidly absorbed into the concrete & rendered completely ineffective.

Once the entire area had been deep-cleaned, we removed our equipment & mixed an eco-friendly, but biocidal solution that would kill any bacteria, mould & viruses. We decontaminated the concrete floor by applying this fairly heavily & allowing it at least a 10 minute kill time.

If you have any questions regarding concrete cleaning or concrete decontamination, please get in touch.

Thank you for reading. 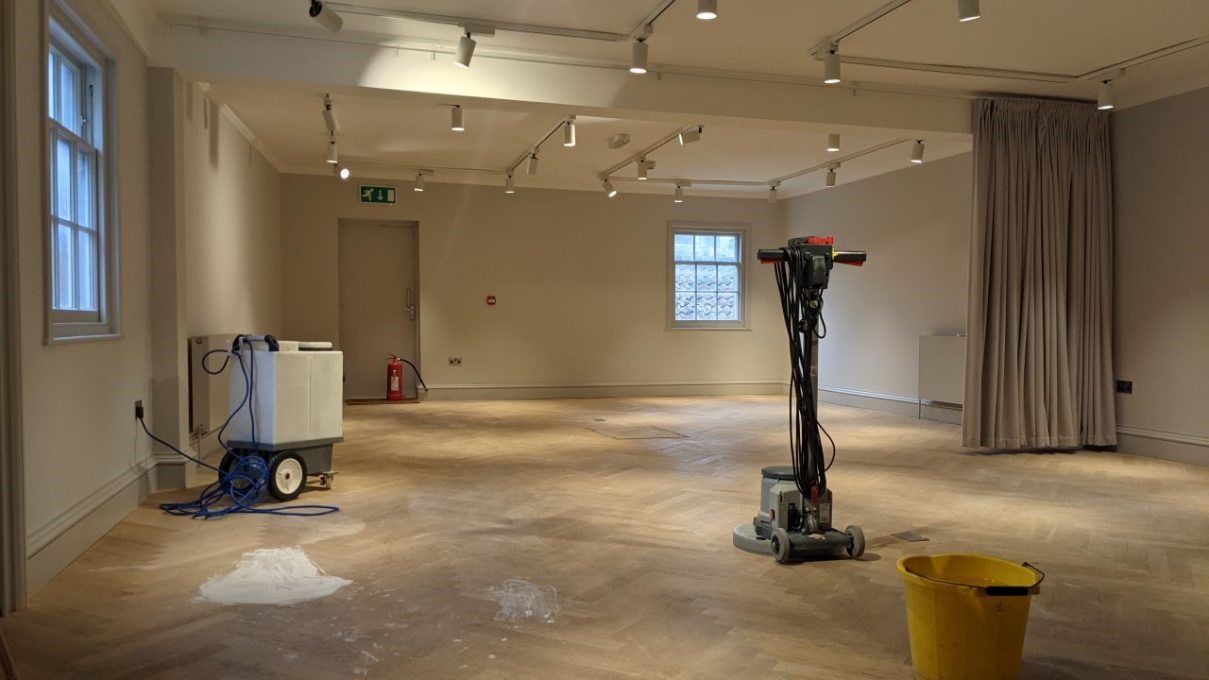 Green Man provide a range of interim & restorative solutions for all types of wood flooring. Our aim is to deliver a high quality & cost-effective alternative to sanding. An initial (free) survey will determine whether your floor is suitable & provide an opportunity to discuss the type of finish you are looking to achieve.

This project was for a high spec commercial premises in Bath. Highly unusually, this was a large area of parquet flooring laid over a year ago that was completely unsealed. Since it has been laid. high foot traffic has already lead to significant deterioration of the downstairs showroom. The manager was- unsurprisingly- keen that the upstairs areas did not suffer the same fate. The image above also shows a notable paint spillage (which later images show that we manage to remove).

Wood does not like to be over-wet, particular bare wood boards such as these. Our team specified a cleaning process where we would apply a wood cleaning solution, agitate using a rotary floor machine, extract the slurry with an extraction machine, then force dry with air movers.

The image below illustrates the process-

By accelerating the drying process, we are able to both protect the wood from damage & ensure that the protective polish can be applied during the same visit. This helps to keep costs down.

Once the floor is completely dry, the multiple layers of polish were applied. In this case, a matt finish was required.

Wood polish is carefully applied to deliver an even finish that enhances both the appearance & durability of the wood flooring.

We will usually apply up to 3 coats, allowing the necessary drying time between each application.

In the both images here, you can see the area where the large paint spillage had been. We managed to almost entirely remove all traces of this accident.

If you have any questions or would like to request a survey for our wood floor cleaning & polishing survey, please feel free to get in touch. 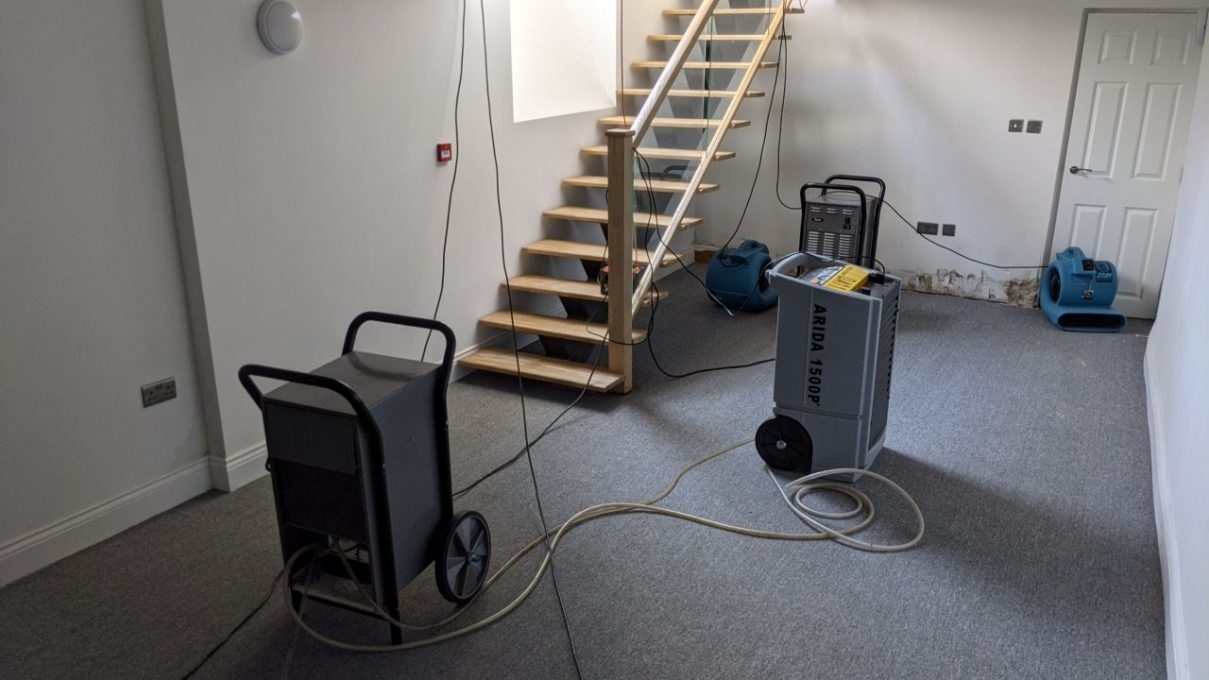 Our team spent several hours last week carrying out surveys & removing drying equipment from a large flood that had affected two adjoining properties in Clifton, Bristol. The escape of water had originated from the pipework of washing machine on the second floor of a 6 bedroom student property & had cascaded down & flooded this property, as well as a newly converted commercial premises beneath.

The initial call-out had been from the flood at the student house, but it soon became clear that the commercial premises was the more badly affected.

The first element of our flood restoration work is an initial Health & Safety/ Risk Assessment to determine whether the location is safe to work in. Once this was complete, we began measuring moisture & humidity levels to establish how severe the flood had been.

Unfortunately, the water had fallen directly onto the electrical RCU in the property, which meant we couldn’t begin any drying until an alternative means of power was organised. After several days, a local electrician installed a temporary RCU drawing power from next door.

Extracting flood water with one of our powerful rinse extraction machines

Mould on this plasterboard is a sign of secondary damage

Where possible, we will always seek to begin the drying process as soon as possible after a flood incident. One of the key reasons for this is to prevent secondary damage. Secondary damage occurs when porous materials & surfaces absorb water & begin to deteriorate. The video below shows how the absorption of water has caused the plasterboard wall & composite wood skirting board to loose structural integrity-

Once this has occurred, it is often necessary to remove all damaged material to ensure that drying can proceed effectively. The ruined areas will need to be repaired after the drying is complete.

Once the flood survey, extraction of water & decontamination work is complete, we can install commercial dehumidification equipment. This usually consists of large dehumidifiers & air movers. These are positioned according to calcluation of the volume of water in the area in each location. This ensures that the drying process is as efficient as possible.

The following two videos are a walkthrough of the drying equipment in the commercial premises & the student house.

Even though there was an initial delay in being able to commence drying on this project, both properties only took a week to be declared dry.

We were reasonably pleased with this outcome & our client was very satisfied with the work we had done.

If you have any questions relating to flood restoration at any of our locations across the South West, please feel free to get in touch.

This website uses cookies to improve your experience while you navigate through the website. Out of these, the cookies that are categorized as necessary are stored on your browser as they are essential for the working of basic functionalities of the website. We also use third-party cookies that help us analyze and understand how you use this website. These cookies will be stored in your browser only with your consent. You also have the option to opt-out of these cookies. But opting out of some of these cookies may affect your browsing experience.
Necessary Always Enabled
Necessary cookies are absolutely essential for the website to function properly. This category only includes cookies that ensures basic functionalities and security features of the website. These cookies do not store any personal information.
Non-necessary
Any cookies that may not be particularly necessary for the website to function and is used specifically to collect user personal data via analytics, ads, other embedded contents are termed as non-necessary cookies. It is mandatory to procure user consent prior to running these cookies on your website.
SAVE & ACCEPT